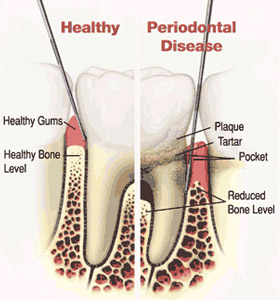 Life after turning 60 years of age should not be any different than life in the past decade. These years are not called the golden years for nothing! However, in this past-paced life of ours, we need to keep healthy and alert even after we reach 60. Most of us will be still working and in order to remain as productive as we have done so, it is all the more important to be able to maintain a healthy diet and lifestyle. Preserving our teeth and gums is the only way to achieve a healthy diet and this series of columns aim to help the older individual realize this aim. A common myth is that we will lose our teeth as we age and hence, check ups and regular cleanings are not important as we will lose our teeth anyway. This cannot be further away from the truth. Caries and periodontal disease are the most common reasons people lose teeth and both can be prevented in most cases.

What is Periodontal Disease?

Periodontal (gum) disease is a chronic bacterial infection that affects the gums and bone supporting the teeth. Periodontal diseases includes gingivitis and periodontitis

Periodontal disease can affect one tooth or many teeth. It begins when the bacteria in plaque (the sticky, colorless film that constantly forms on your teeth) causes the gums to become red or inflamed. Any plaque that has not been removed by the toothbrush or floss will harden to become tartar. Tartar can only be removed via scaling by a dentist.

In the early stages, the gums redden, swell and bleed easily. There is usually little or no discomfort. This condition is called gingivitis and a recent survey done in Singapore indicates that more than 80% of the population show some signs of it. It is usually caused by poor oral hygiene practices and techniques.

Untreated gingivitis can advance to periodontitis. With time, plaque can spread and grow below the gum line. Toxins or poisons produced by the bacteria in plaque invade the gums and eventually causes the bone that support the teeth to be broken down and destroyed. Gums separate from the teeth, forming pockets (spaces between the teeth and gums) that become infected. As the disease progresses, the pockets deepen and more gum tissue and bone are destroyed. Often, this destructive process has very mild symptoms. Eventually, teeth can become loose and may have to be removed.

What can be done to prevent Periodontal disease?

Most of the time, periodontal disease occurs due to neglect or ignorance. To prevent gingivitis and periodontitis, the following has to be done by the patient.

There are other conditions that may affect the health of the gums and increases the person’s risk to periodontal disease and this will be discussed in next series.