Gum Diseases. What is its impact in our lives? 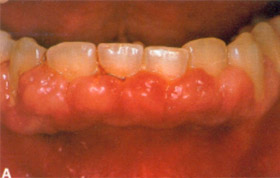 In the last issue, we discussed the types of periodontal (gum) disease, how they come about and the preventive steps we should take to avoid the disease. In this issue, we will look at how various medical conditions and medication can affect the gums and oral condition. This has become more relevant in this present age as people have longer life expectancies but may be on long-term medication to treat illnesses such as diabetes, high blood pressure, cancer or osteoporosis.

Diabetes and periodontal disease have one thing in common. Both are chronic (long-term) diseases that can never be truly cured but can definitely be well controlled.

There has been some research to show an association between gum disease and heart atatcks. Apparently, people with advanced gum disease run a higher risk of getting a heart attack. This is however, just an association and a direct link has yet to be proven. A particular medication for high blood pressure, nifedipine, has also a side effect of producing gum hypertrophy (enlargement) usually in patients who already have gum disease. There are many other medications that have an impact on the gums as well.

Medications and the oral condition

Hyperplastic (overgrowth) gums. Medication such as Nifedipine, Cyclosporin, which is used in transplant cases eg kidney transplant patients and an epilepsy drug can cause overgrowth of the gums. This is turn makes it difficult for the patient to keep his gums and teeth clean and increases his risk of periodontal (gum ) disease. This condition can be treated successfully by the Periodontist to give a normal looking appearance again. Good follow ups and maintenance on a regular basis can keep this condition under control.

Forsamax is a commonly used medication to treat osteoporosis especially in the post-menopausal woman. Other bisphosphonates are used to treat certain cancers. Unfortunately, in those patients on bisphosphanates such as Forsamax, there is a small risk to contract osteonecrosis (infection of the bone) of the jaw bone whenver an extraction needs to be done, oral surgery or implant surgery. Those on intravenous bisphosphonates have a much higher risk of contracting osteonecrosis even when none of these surgeries are done.

Hence, those patients on these drugs should ensure they have good dental health and regular follow ups to maintain that health.

Radiotherapy in the head and neck region

Those patients who have gone through radiotherapy for cancers in the head and neck region, the most common being nasopharyngeal cancer, suffer from lack of saliva flow after the therapy. This leads to a dry mouth, ulcers, burning gums and an increased risk to decay and gum disease.

Various prescription and over the counter creams, mouthwashes and ointments can help alleviate all these conditions. Such patients should seek dental clearance and treatment before and after radiotherapy to avoid long term dental problems which become major.

There is no reason why someone who has gum disease should be suffering. There is treatment available and results are always better when detected and treated early.

You can turn your gum health around from looking like picture (a) to picture (b) and have teeth for life. 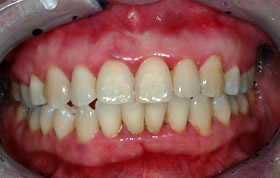 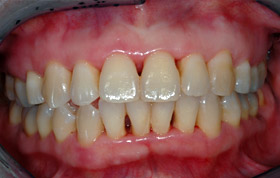 B. Pink and healthy gums